The Deception of Starred Ratings 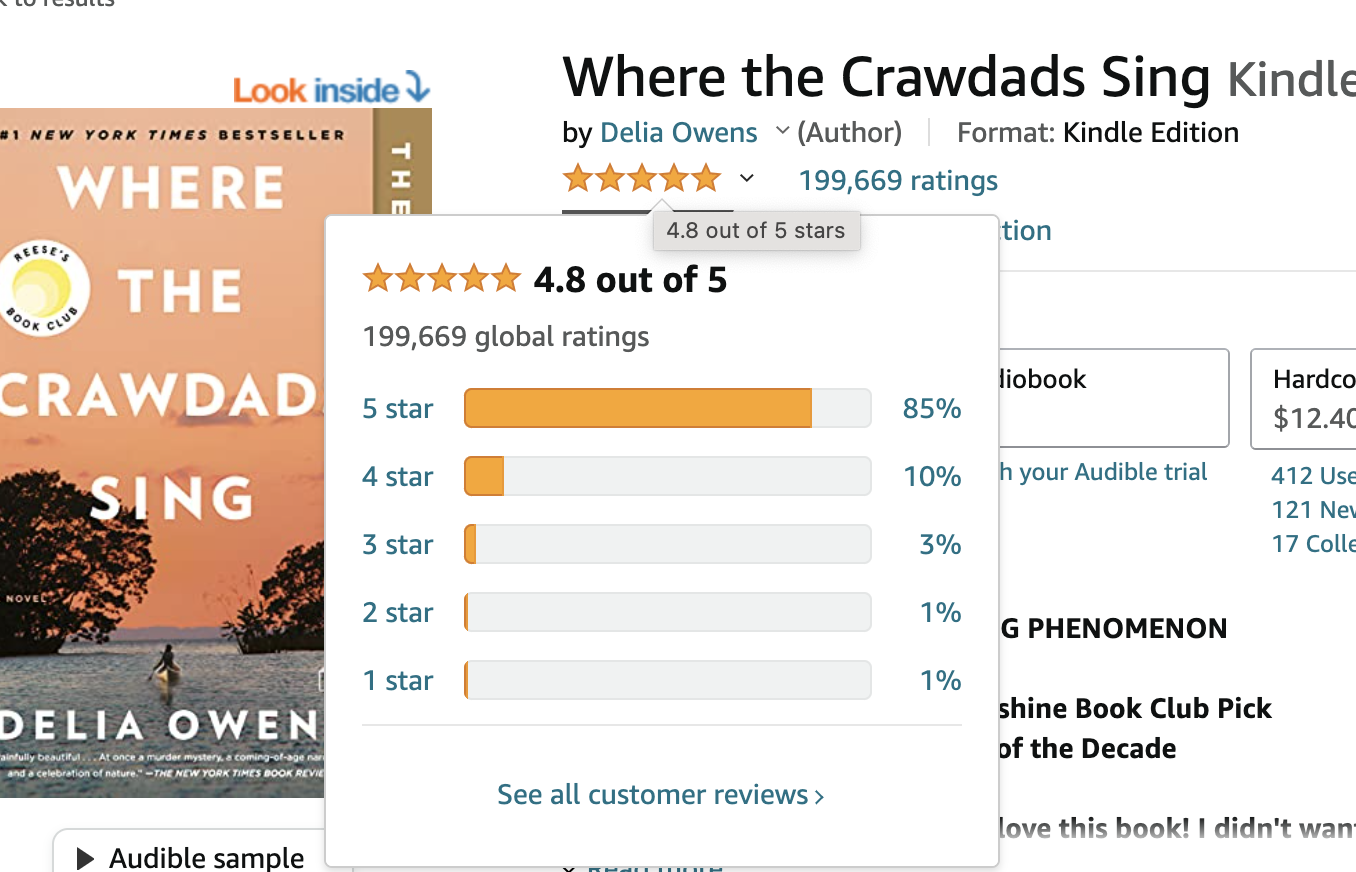 Do you buy your books based on Amazon's ratings? How accurate do you think those ratings are? Dan Klefstad touched on this subject in his article The Tyranny of Starred Ratings, and I touched on it in my post Books We Did Not Finish in 2021. In mine, I spoke about the unreality of the ratings on Where the Crawdads Sing, which are now up nearly 57,000 reviews since that last post, and hanging in at 85% 5-stars.

Do we care if the ratings are realistic, or do we only want to buy the books with the most stars?

If you have a published book you probably live and die by those stars. I recently saw this comment on last week's post Fear and Publishing (another by Dan Klefstad): "My debut, which has loads of four and five star reviews on GoodReads, also has a couple of two stars. So far, I’ve successfully embraced them as part of the package, but they do nag at me."

Why should they nag? Don't we want an honest, balanced view of our work? Don't we want people to gather opinions - positive and negative - and then decide for themselves whether or not to buy? Only honest reviews can provide that. But maybe we don't want that. Maybe we think that if people don't like a book or a movie or theatre, they shouldn't write a review.

We, as authors, can't truly think every person who reads our work will love it. We hope so, of course, but intellectually we know that's not possible. We live in the real world, a world full of opinions, a world where there's hardly consensus anywhere about anything.  In today's world kids get trophies for participation. Does that feel as good as a trophy that's received for success? For some, I suppose that's a trophy is a trophy. For the rest of us, we want to earn our accolades with effort and hard work and tenacity. With all that, though, there's no guarantee that everyone will like our work, or even that anyone will like our work.

But that's our writing life. It takes courage to put your work out there. It's not just your writing that's on the line, it's YOU. Be brave. Do your best work and hope for the best. It will resonate with someone. Maybe only a few. But maybe hundreds, maybe thousands. We never know. However many stars you get for your book, it's more than you had before.

Here's a one-star review I received for my novel. It doesn't nag at me.
First of all, I consider myself a pretty avid reader. I will read everything that is put in front of me, and every so often I read a chick lit book for guilty, relaxing pleasure -- to take my mind off of the daily grind of life. I don't expect much from these books. So when a book is so awful that I find myself skimming and skipping pages just to finish (I try not to leave a book unfinished, regardless of how terrible it may be), you know I think it's bad. It was a ridiculous concept and a book that had me shaking my head thinking "this is one of the worst books I have ever read." Mind you, I am more of an adventurer and a quester, more than conservative by any means. Given my personality, one would think this book might appeal to me, since the "not always taking the safe and steady route" is an intertwining theme in this book. However, I could not be done soon enough with this book. And then it went where it belonged -- the trash. I couldn't even bring myself to donate it as I typically do with my completed books. Enough said. It was the first and last time I ever read anything written by this author. To each his own!

Frankly, I usually read the three star reviews on GoodReads rather than the five star ones.  They usually tell me more about what I might like about the book and what I might not.  For my own debut which releases in March, some of the lower ratings have glowing descriptions (“Loved the characters; dealt with difficult subjects in an even-handed way, etc) so that I often shake my head in confusion at the number of stars.  Some people are just “hard graders.”

So glad for this post! After my memoir, Under the Birch Tree was published, I thought what’s not to like about a nice, quiet story? But then a rating posted “hard to relate to - may be the generation gap.” I chuckled. Other ratings mentioned how the book resonated because of relatable experiences. No, not everyone is going to see the same thing in our books.

I go straight to the three star or four-star ratings - they are typically more accurate. After looking over the comments, before I buy, I check my local library.

This same star rating conundrum plagues me when writing a response to a book that I liked some parts of and failed to connect with other parts.

I’d much prefer booksellers (Amazon especially) would allow me more flexibility and no stars.

hi samantha, thx for the newsletter and for posting that review of your work, but the review was total bs!

When I’m trying to decide what to read, I appreciate the Amazon star ratings. I go first to the one- and two-star reviews because they sometimes tell me that the book has too much explicit sex or language for my taste or that the writer hasn’t done his or her research, in which case I don’t waste my money on the book. But I ignore the reviews that merely reflect a taste different than mine.

I am so heartened by all your responses. Happy to see you’re not blinded by the light of all those stars.

I wouldn’t mind a few less than stellar reviews if the reader reads my genre, but it can be frustrating when a reader says, “not my genre” and leaves a one or two star. Then why are they reading it to begin with?

I think some people ONLY read FREE books and many of the one and two star reviews seem in this category. I’ve had many author friends who tracked purchased reviews vs. freebie reviews. The lower stars were heavy from the freebies. I wonder why.

So, I agree and welcome honest, thoughtful, CONSTRUCTIVE criticism, but only if my reviewer reads my genre regularly, otherwise, they weren’t my audience to begin with.

That’s not to say people shouldn’t read across genres, but it seems strange to compare apples to oranges even in book reviews.