What if Your Book Doesn’t Sell? 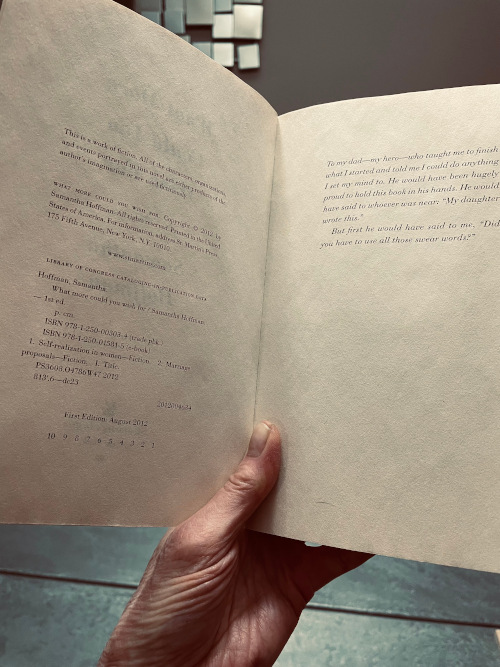 When you hold your book in your hands for the first time and see your name on the cover, see a publisher’s imprint on the copyright page, have your very own isbn, people reviewing it on Amazon...you’ve arrived. Your writing career is launched. It will sell hundreds of thousands of copies, you’ll be booked on all the talk shows, there will be a bidding war for the movie rights.

Well, not always. Actually, hardly ever.

The fact is, it’s really hard to get a book published, especially fiction, especially if you’re going the traditional route. There’s a finite number of publishers, they publish only a certain number of books per year and there’s tons of competition vying for those slots. Not only do you have to have talent, you have to have ambition, tenacity, motivation and passion, and you have to be able to handle rejection. If all that works and you get a publishing deal, there’s little more thrilling than seeing your book, your baby, the project you’ve worked on for the past two years (or seven or ten) in print.

You see, there’s luck, a factor in everything we do. If you have that along with everything else it may propel you to the top. Without it, your debut novel might sell well, it might sell modestly, it might not even do that. If you got an advance and you don’t earn out of that advance (sell enough copies to pay back that money) you probably won’t get another book deal with that same publisher. And then you start over, trying to find another publisher, maybe even another agent.

I’m talking specifically here about traditional publishing. There are other options, of course – self-publishing, small press, hybrid publishing. Ultimately, though, no matter which path we choose, we want people to read our work and we want it to sell.

I was inspired to write this because my friend Therese Walsh wrote a blog post titled Recovery From (Something That Tastes an Awful Lot Like) Shame. She got a two-book deal for her first novel and how wonderful is that? Sounds like a dream come true. But what happens if your first book doesn’t sell well? Read Therese's post for a real-life account:

Some of my friends know the whole story, but not many do. I’ve kept details to myself from the start, including the size of my first book deal (major, 2-book) and the expectations of my agent and acquiring editor (also major). In Germany, a thrilling foreign auction fueled all of our hopes. Then the 2008 crash obliterated the global economy, and aside from one other sale that was all the foreign publishers wrote. The splashy Big Five Publisher luncheon that had been scheduled in honor of the book was cancelled (though it had always felt surreal that it had ever been planned). It became clear at some point that my marketing team’s tone had changed—that somewhere along the way we’d moved from genuine excitement to the crossing of fingers to the bracing for a harsh reality, which I now know was probably based upon a clear view of preorders. The book released, but it far from sounded the bell, and then the trickle of disappointment everyone felt turned into a wave.

My debut, the one I’d worked on for ~five years, was a sales dud. Read the rest of Therese’s article

Like Randy Ingermanson says in his article What if Your First Novel Fails Miserably? there are a number of reasons why your book didn’t sell:

"Your publisher gave it a lousy cover.

Your publisher failed to send out review copies.

Your publisher dropped the ball on distribution.

Your publisher screwed up on pre-sales.

Your book came out too early.

Your book came out too late.

Your publisher had a dispute with a major retailer and didn’t get copies into any of that retailer’s stores.

A thousand other excuses."

He also says, "...most books sell worse than average." Read the rest of Randy’s article

And here’s an article I wrote in 2015 about the reality of being an author whose debut book didn't sell well and who didn’t get a second book deal.

The bottom line? This is a tough business. If your book doesn’t sell well, you’re in good company.

If you’re a writer, you do it for love of the craft. If you’re doing it to make money, you’re likely in for disappointment. Passion might fuel your writing but it’s not likely to fuel your pocketbook, unless you’re very, very lucky. Write because you have something to say, because you want to tell a truth, share an experience, teach a lesson. Even if your fan base is modest, the next best thing to seeing your book in print is when someone reads it and says, "This story could have been mine. Thank you so much for writing it."

Comments? Scroll down below the bio to share them.

Thanks for reminding us that success can mean different things to different people. When people say “I loved your book” and mean it, that encourages me to keep writing. After two books, a prequel and a sequel, that weren’t blockbusters I’m still at it. I hope to have my third ready for publication this year. If writing is your passion, keep doing it!

Your article comes 2 wks after my “mini-meltdown” on CWA’s FB Page. I came to book writing late in life & I’ve pushed myself too hard. My 1st book’s Global Media Award helped me to keep going. My 2nd book came out May 2019, A Hero on Mount St Helens, with eruption’s 39th anniversary. Was that too early? I’ve not thought so.

4 weeks before Covid, my 3rd book released. That’s 2 books in 9 mths from mainstream publishers. Book 3 -Manteno/Images of America is endorsed by Prof Emeritus, Community Studies, GSU. I brought to light a long-erased figure in the fight for Married Women’s Property Rights.

2 wks ago, I was about to start writing Book 5. Turns out, I needed to reflect on this Writer’s Life that has brought me pennies per hour for a decade.
In the big pix, my writing is a gift -w/ no strings. What hurts is too many people don’t care (realize) that book writers aren’t in it for fame and fortune—at least, most aren’t. Peace.

What an excellent article. Thanks to you, Randy, and Therese for sharing your experiences with the publishing industry and how sales effect even the best of books and authors. The up to date link to information about “The Big 5” is also terrific. This is really a valuable blog, Samantha.
Best,  Mary

I’m a member of WU and read Therese’s post there. It’s gut-wrenching. My MS is finally finished and her words gave me plenty of pause. I’ve always known trad publishing would be a shot in the dark, but there seems little motivation to go that route anymore. It’s depressing as hell, to be honest.