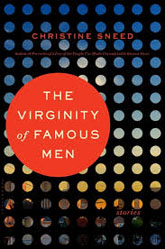 The Virginity of Famous Men

The trip was her son’s reward for earning an A in all of his classes the preceding year, and she and his father had told him that he could choose anywhere in the country.  To their surprise, he did not pick Los Angeles or New York, Aspen or Maui.  He wanted to go to Captiva, a tiny island off the Gulf coast of Florida that had nearly been split in half during a hurricane a few years earlier.  It was the sort of place that families went to vacation with other families.  She did not realize until a few hours after they arrived that he had chosen the island because a girl he liked planned to be there with her parents at the same time.

But there were other problems, worse ones, that she would have to face, the first being her husband’s absence.  At the last minute, he was informed by his boss that he could not go to Florida, despite having already been granted the week off.  The day before they planned to leave, he was ordered to fly from their home in Chicago to Shreveport, Louisiana.  A warehouse had burned down, one where his linens-manufacturer employer stored cotton for its looms.  The fire had taken two adjacent warehouses with it, neither of which the manufacturer owned.  Steven was apologetic and worried and told her and Tristan that he would try to join them after a couple of days.  He hoped it wouldn’t be as bad as it sounded in Louisiana, and that they might let him go after the insurance adjusters visited the site and the police and firefighters were done poking around.

They had not taken a vacation together as a family in two years, aside from a few tense weekends at a lake cottage in central Wisconsin where Tristan had pouted over not being home with his friends and his computer.  She was alternately enraged and morose that Steven would not be going, and she would have canceled the trip if he and Tristan had not argued so convincingly that they go ahead as planned.  Why Tristan still wanted to go when it was only the two of them had perplexed her, but at the time she had been flattered: they did so little together outside of the house because he had turned seventeen in February and could rarely be bothered to have dinner out with her and his father, let alone travel with her to a beach resort a thousand miles away for one entire week.

It was mid-March and crowded and 78 degrees when they arrived at the resort where they had booked two rooms with a view of the Gulf.  She had held onto the second room because she hoped her husband would join them but didn’t really believe that he would.  She also knew that her son was too close to adulthood for them to share a room, his body a man’s version now with whiskers and wiry leg and armpit hair that she tried not to see but it was aggressively there, as were his dirty clothes that smelled like his father’s after a morning of yard work or an hour at the gym.  The previous fall, she had made Steven talk to him about condoms and pretty, vulnerable girls, which they had already talked about when Tristan was 12, but it had seemed necessary to her that they have this talk a second time.  He had gotten his driver’s license the preceding spring and for a while was taking out the same girl who then suddenly he wasn’t taking out anymore and Jan didn’t know what had happened because he would only tell her and Steven that it hadn’t worked out and what was the big deal?

The resort had been badly damaged by the hurricane and many of the little villas and apartment buildings were still being repaired or completely rebuilt, though the hibiscus and oleander bushes had survived or else been replanted and had grown again to a floral effusiveness that reminded her of bridesmaid dresses and frilly tuxedo shirts, but beautiful ones that people wouldn’t have cringed over.

“This place is a dump,” Tristan announced as they drove from the front office to the square yellow building that housed their rooms.

“When was that storm?  Four years ago?”

“What’s taking them so long to fix things?”

“Everything on the island probably needed to be repaired.  There are only so many people nearby who can do this kind of work.”

“It probably doesn’t work that way.”

“Well, it should,” he said dismissively.

Before and during the plane ride from O’Hare to Ft. Myers, they had argued over his shoes and neither of them had recovered yet.  Despite the freezing weather in Chicago, he had insisted on wearing his Tevas without socks and Jan had not been able to deter him.  Steven had already left for Shreveport and couldn’t gently bully Tristan into backing down.  More than once during the three-hour flight, she had looked at his feet and sighed and he had scowled back at her and barked, What, Mom? loud enough for the people in the row ahead to hear.  Two of them had corkscrewed their necks to stare back at her and Tristan with a gleeful frown.

Their rooms were connected by an interior door that locked on both sides.  Jan had misgivings when she saw this, even though she had keys for the hallway doors of both rooms.  Despite his gruff dismissal of the resort’s grounds, Tristan seemed to like his room, which was light-filled, smelled of lilacs and had two queen-size beds, along with pastel paintings of regional seashells.  There were several large, fluffy taupe towels in the bathroom, seashell-shaped soaps, shampoo, a shower cap, a thick terry cloth robe.  The minibar was locked and, she hoped, unbreachable.  She had called from Chicago to request that the code be removed from the room before check-in.  It appeared that it had been – no instructions sat on top or were taped to the minibar’s door.

It had been a mistake to come.  She could not ignore this fact anymore, but she said nothing to Tristan who had flopped down on one of the beds and was now giving her a calculating look.  “Don’t you want to get your stuff unpacked? Or are you going to hang out here and stare at me all day?”

A fact she had been trying to ignore for the past year:  she and Steven had witlessly, indulgently, allowed their son to cultivate the least appealing characteristics of a privileged teenaged boy.  At home it was easier to ignore his occasional snits, his snide comments and self-absorption.  Hormones, Steven would sometimes say, shrugging off most of her complaints about their son’s irritable moods.  He wasn’t getting arrested, was he?  Driving drunk or crashing the car or doing drugs, was he?  He wasn’t stealing or not coming home when he said he would.  Most boys his age didn’t seem that much different from him, she could admit, and she had tried to believe that this was only a temporary, unpleasant phase of their development – many of his friends were distant or smug too, prone to giving her benignly vacant smiles, then laughing as soon as she left the room at a remark one of them had snickered under his breath.  Tristan’s good grades, his sudden striking looks and popularity with girls and other boys made his egotism understandable, if not forgivable, but she had hoped that once he learned to see these gifts as conferred by the illogic of biological heritage and blind good luck, he would become more generous. There were also others with even more to offer than he had, which surely he would understand at some point too?

At present, this did not seem so likely.  Her only child could just as easily, perhaps more easily, grow up to be selfish for as long as he would live, unless she and Steven drastically changed the way they responded to him.  This week alone together, however, did not seem the ideal time for her to start behaving differently to his provocations.  But if not now, when? she wondered wearily, her stomach tense with worry and self-contempt.

“If you can’t speak to me politely, don’t say anything at all,” she said.

“Fine,” he said. “No problem.” He closed his eyes and kept them closed until she left, unlocking the shared door on her way into her room.

Christine Sneed is the author of the novels Paris, He Said and Little Known Facts, and the story collections Portraits of a Few of the People I’ve Made Cry and The Virginity of Famous Men. Her work has been included in publications such as The Best American Short Stories, O. Henry Prize Stories, New Stories from the Midwest, New England Review, The Southern Review, Ploughshares, New York Times, San Francisco Chronicle, and O Magazine. She has been a finalist for the Los Angeles Times Book Prize, first fiction category, and has been the recipient of the Grace Paley Prize, the 21st Century Award from the Chicago Public Library Foundation, Chicago Writers Association Book of the Year Award, Society of Midland Authors Award for best adult fiction, and others.  She lives in Evanston, IL and teaches for Northwestern University’s and Regis University’s graduate creative writing programs. (Photo credit is Katie Barthelemy.)

For past issues of the Write City Magazine, visit our Archives.