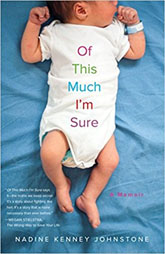 Of This Much I’m Sure: A Memoir

Excerpt from Of This Much I’m Sure: A Memoir by Nadine Kenney Johnstone

But as the doctors rush me into emergency surgery, and Jamie whispers I love you like he fears he will never hold me again, a third of my blood volume pumps not through my veins but into my body, poisoning my organs.

I understand that these breaths might be my last.

Just before the anesthesia kicks in, what grips me is the irony—that this quest we’ve embarked on to create life might be the very thing that ends my own.

And if I do live to survive, I am acutely aware that my life will forever be categorized as before IVF and after.

Here is the part of the story that Jamie and I always omit from the telling of our traumatic tale. After the egg retrieval, we didn’t go straight to our house for me to rest, as directed. Almost twenty eggs had just been extracted from my ovaries and were being inseminated in a petri dish while I recovered. A pair of those fertilized embryos would be inserted into my uterus in three days, and I would be what I had wanted to be for so long: pregnant.

But then we made a stop on the way home from the clinic after the egg retrieval, and I will forever wonder if this pause in our journey changed our fate. It makes me question if I am to blame for the terror I faced that October Tuesday and the weeks, months, years that followed.

What detour could have been so important that it caused us to ignore doctors’ orders? The pharmacy? The grocery store? No and no. The destination was Orchard House—Louisa May Alcott’s home in Concord, Massachusetts, where she wrote her autobiographical novel, Little Women.

Every Christmas, I used to watch the movie version of the book and pine after the sort of life the March family had in the 1800s. I, too, wanted the warmth of a fireplace, the creak of old wood floors, furniture strewn with handmade quilts, hot cider for sipping. I craved cinnamon Bundt cakes and orange-glazed roasts. I ached to sing carols to the chords of my sister’s piano playing.

Instead, we spent the Christmas Eves of my youth in our cold basement that Mom made festive with dollar-store stockings and plastic candy canes. Our windows fogged, not from the heat of a hearth, but from clouds of cigarette smoke. Dinner was South Side Chicago grub—Italian beef sandwiches, fried chicken, mostaccioli. In lieu of carols and piano tunes, my drunk uncles clanked bottles of Jager and called each other “jag-offs.”  My prepubescent cousins and I played dress-up, but rather than donning bonnets and lace gowns like the March girls, we stuffed socks into our plaid dresses and smeared our mouths with lipstick. To entertain the family, we belted out made-up songs with lyrics like: “We’re big-busted women, and we know how to dance.”

On Christmas Day, when my sister, Dana, and I watched Little Women, I most enjoyed following Jo’s quest to become a writer, scenes of her sitting at her attic desk near the frosty window late at night. As she dabbed pen into inkwell and scribbled away, something ignited inside of me. Possibility.

I spent my childhood evenings scrawling in my diary and poring over books by flashlight. I wrote the title of my first novel in a “Book about Me” that I filled out in second grade. Under ideal profession, I wrote: “Writer,” then, “My first novel will be called Prisoner of Fate.”

Of course, I knew nothing about fate at that age—I wouldn’t know for another twenty years. And so, in my opinion, the most horrifying moment in Little Women was not the father being wounded in the Civil War, or the death of young Beth, but when Amy burns all of Jo’s manuscript pages in the fireplace out of spite. Back when “loss” was an abstract term, this seemed the absolute worst calamity one could endure.

Like Jo, who pursued her writing career in New York, I imagined that I would go off on my own and chase my dreams in the big city. I always envisioned living on the north side of Chicago after getting my master’s, spending my days at coffee shops, sipping caramel lattes and typing away in the glow of my computer screen.

My visions of the future never revealed a man or children, and there was a quote in Little Women that I always identified with: “You are the gull, Jo, strong and wild, fond of the storm and the wind, flying far out to sea, and happy all alone.”

I saw this as the way of writers. They were too self-involved to tend to others. Plus, life as a mother seemed so much harder than that of a career woman.

How selfless one had to be.

My favorite part of the Little Women movie was the arrival of a different sort of bundle—the pages of Jo’s novel typeset by the publisher and bound in twine. This, I thought, was the greatest creation one could birth.

I spent my grad school years exactly as I had envisioned—working and pursuing writing in Chicago. During the week, I studied at Columbia College in the South Loop, then I passed the weekends at Panera or Starbucks in a writing frenzy fueled by espresso. It was my utopia.

Until Jamie entered my life.

He was from Massachusetts and we met while we were both on vacation in Florida. Our long-distance relationship began, and my whole world changed.

I moved into my own studio apartment in Chicago where Jamie would stay with me when he visited. I still spent Saturdays at cafés, but now I stared at his face instead of a Word document. When he went back to Boston, my bed felt so empty that my fantasy of living alone surrounded by books in a city high-rise now seemed like the loneliest form of existence.

During that time, I went out for Indian food with an office-mate and gushed about my latest decision to move to Massachusetts for Jamie. Still single in her 50s, my coworker encouraged me to publish before settling down and procreating. “Anyone can get pregnant,” she said, “but not everyone can write a book.”

It turns out the first part of her statement wasn’t true. Not when the man has had testicular cancer and the chemo has affected the speed of his sperm. Not when the woman has undiagnosed hypothyroidism, hindering ovulation.

At twenty-four, I moved East and Jamie proposed to me. I traded my Poets and Writers magazines for Modern Bride. At the age of twenty-six, we moved to the rural burbs of Massachusetts. Just before I turned twenty-seven, I married Jamie, and at twenty-eight, we started operation pregnancy. What prompted me to choose a life so different from the one I had originally imagined? Maybe it was my innate desire to always pursue life’s next steps. Or maybe it was that family Christmas scene from Little Women I was after—the colonial house, the fireplace, a living room filled with laughter.

Built in 1907, the house that Jamie and I bought just before we got married possessed a warm, antiquated appeal. Exposed wood beams ribbed the ceiling of the living room; a cast-iron stove heated the first floor. The second level boasted a small room so ideal for a little boy that I could imagine our future son doing his homework at the built-in desk. I could see his wooden trains on the shelves and his bed under the skylight, the stars singing him to sleep.

A year into our marriage, Jamie and I attempted our first in-vitro fertilization cycle, and after a month of hormones, I was ripe with egg follicles. I resembled the women my cousins and I had once imitated—curvy and voluptuous, albeit a bit bloated. Each of my ovaries grew from the size of grapes to what felt like grapefruits, and my eggs were ready to be harvested.

The retrieval was a quick outpatient procedure. The doctor went through my cervix and extracted my eggs via a needlelike syringe. The retrieval only took about fifteen minutes and after I came to, we were free to go. We were in and out of the clinic in under two hours.

It all seemed so effortless, so painless.

The nurses told me to go home and rest. I didn’t have to lie in bed all day; I just needed to stay hydrated and avoid strenuous activity.

When we emerged from the clinic, the fall landscape blazed orange and red.

We drove down the back roads, the tires kicking up crunchy leaves in our wake. Jamie drummed the steering wheel while I rolled down the window and inhaled the crisp air.

I rubbed my stomach, and Jamie placed his hand on top of mine.

I was feeling so good that, as we drove through Concord, I asked Jamie to stop at Orchard House. Because I had canceled my university classes for the procedure, we now had the entire Tuesday to spend together—a rarity I wanted to take advantage of. True, the doctors had said to “take it easy,” but to me, that meant not climbing any mountains or running any marathons. A little house tour wouldn’t hurt anybody.

Jamie and I passed the time until the next tour by perusing the gift shop on the lower level. But as I blissfully looked at old rocking chairs and photographs of the Alcott family—items meant to turn back time—my own hourglass was losing sand much too quickly. Because of the sharp syringe used to extract my eggs, my ovaries were like water balloons with dozens of pinpricks. My right ovary had clotted on its own, but, unbeknownst to me, my left ovary hadn’t. It gushed blood that drowned my organs as I flipped through Louisa’s books in the gift shop. I can imagine the two halves of my body fighting—my left ovary versus my right—my desire for independence versus my longing for motherhood.

Did I intensify the bleeding by climbing the steep stairs from the parlor to the bedrooms? Would it have clotted if I hadn’t walked around for the full hour of the tour, if I hadn’t stopped to admire the four-post beds, the desk where Louisa wrote her novels? Would I have saved myself from emergency surgery, a grueling recovery, depression, marital strain, and a failed pregnancy attempt if I had just gone home that day?

Or was this my fate?

Nadine Kenney Johnstone is the author of the memoir, Of This Much I’m Sure, about her IVF challenges and the healing power of hope. Her infertility story has appeared in Cosmopolitan, Today’s Parent, MindBodyGreen, Metro, and Chicago Health Magazine, among others. She teaches at Loyola University and received her MFA from Columbia College in Chicago. Her other work has been featured in various magazines and anthologies, including Chicago Magazine, The Moth, PANK, and The Magic of Memoir. Nadine is a writing coach who presents at conferences internationally. She lives near Chicago with her family. Follow her at nadinekenneyjohnstone.com.

For past issues of the Write City Magazine, visit our Archives.